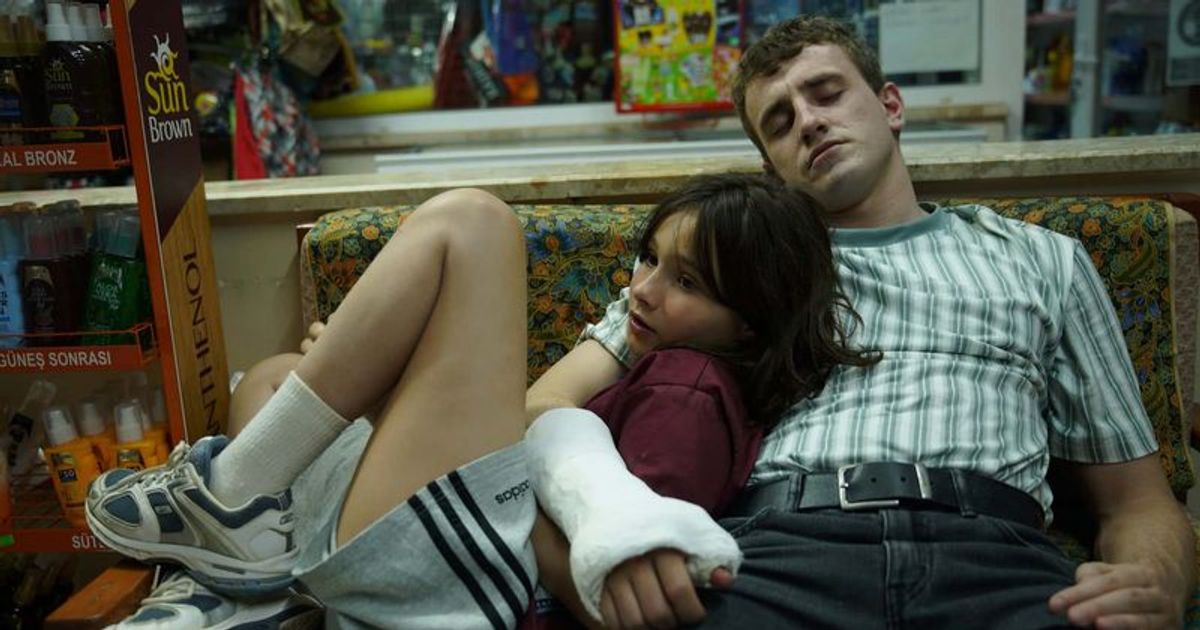 The worst thing in life is realizing that we didn’t live some of the most meaningful moments of our lives the way we should have. This is what Charlotte Wells’ directorial debut, Aftersun, focuses on, exploring the relationship between a father and daughter as they enjoy the best vacation of their lives. There’s something unique and exciting about first-time filmmakers embarking on projects about human relationships that are truly sensitive. So the film revolves around Sophie and her father, Calum (Paul Mescal), a divorced man who takes his daughter on vacation while coping with loneliness and deteriorating mental health.

Both of them have a good relationship and we learn that as the film progresses. The film, which made its UK premiere at the BFI London Film Festival, opens with a handycam of Calum looking genuinely happy and enjoying the moment until a question from his daughter leaves him confused. The clip pauses and we follow all the moments they spend during their vacation as we flashback. Sophie is an 11-year-old girl who is on vacation with her father. In the first moments of the journey we see that both are having fun and full of happy moments. However, over the course of the holiday, we learn about a parent’s insecurities and how they try to cope with a lifetime of disappointments. For him, Sophie is the only reason why he is alive today and why he can enjoy his life for a short time. Now, I know you must be thinking this is another traumatic art house film, but Aftersun is something bigger than just an art film.

The story is really captivating and you will think that some of these moments happened to you or someone you know. The film is an intimate portrait of a father-daughter relationship that tells us memories are tangible. To be honest, Aftersun is one of those movies that’s really hard to write about and that’s because of all the emotions you go through while watching a story that’s really subtle with themes like fatherhood , childhood, loneliness, responsibility, grief and so bypasses vulnerability. Well this movie might not be for everyone and I understand that because they might not be able to understand what the characters are going through and feel like they’re just watching a movie about a father and daughter going on vacation . But if in such situations you’ve had trouble understanding what lies ahead and why everything seems so bleak, you’ll find that “Aftersun” is the most extraordinary version of depression in the history of cinema.

As for the performances, Paul Mescal gave a phenomenal performance that will be remembered for a long time. It’s a career-defining performance from a supremely talented actor who takes everyone on a profound and melancholy journey. A certain shot of him crying when he’s alone in her hotel room after a fight with his daughter will no doubt break your heart. It shows how challenging it is to be a parent who is going through some of the toughest times in their lives. It’s not melodramatic and perfectly captures the emotions of a sick father.
On the other hand, Frankie Corio triumphs in her acting debut and the role of Sophie feels like it was tailor-made for her. Sophie’s story navigates through different stages of life where she goes through many emotions. The coming-of-age storyline takes the film to a whole new level, and Corio is stunning in every frame she’s in.

Spectacular performances aside, there’s something else we shouldn’t forget, and that’s the stupendous direction of Charlotte Wells. This is her feature film debut and she has proven that she is a world-class talent ready to take on the world with stories that resonate with audiences. The great dance scene between the main characters takes you back to the days when you were just enjoying the moment with someone you love the most. Aftersun is moving in many ways, all because of its amazing central themes. The last shot of the film is one of the best shots of the last five or ten years and connects the three most important stages of life: the past, the present and the room where the daughter and father are together.

Unforgettable and moving, “Aftersun” is a triumphant take on heartbreak. It’s subtle, melancholic and an experience you’ll never forget. A modern masterpiece.