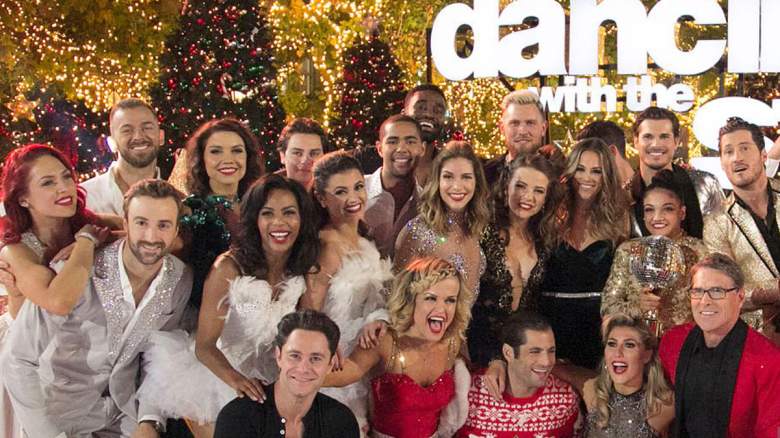 A former Dancing With the Stars cast member says being on the show helped him prepare for his new job as a broadcaster. Find out how “Dancing” helped racer James Hinchcliffe trade his Indycar for the broadcast booth.

In late 2021, Hinchcliffe announced that he was “retiring” from full-time IndyCar racing and taking a new position on the NBC Sports broadcast booth. For the 2022 season, he is working alongside Leigh Diffey and Townsend Bell, replacing broadcaster Paul Tracy.

“I got a taste of calling IndyCar in 2020 and it really cemented my desire to get into that side of the sport,” Hinchcliffe said in a press release. “Educating people about IndyCar has always been a passion of mine and I couldn’t be more grateful for the opportunity to tell these stories from the booth with a few pros in Leigh and Townsend.”

Now, in an interview with People, Hinchcliffe said his time on Dancing With the Stars helped him prepare for the jump to broadcast.

“I think one of the things that drew me in the first place was that there’s something about the rush of live television. They do this countdown, the light comes on and it’s your turn,” said the driver.

He added: “It’s not just about doing the steps and going through the moves. There’s a complete performance element,” similar to “Dancing With the Stars.”

Hinchcliffe competed on season 23 of Dancing With the Stars alongside pro partner Sharna Burgess. The two finished second behind winners Laurie Hernandez and Val Chmerkovskiy.

When Hinchcliffe announced he was quitting racing, Burgess posted on her Instagram stories, “That’s all!!! @Hinchtown I’m so excited for everything to come. Your talent and possibilities are endless and I know this next chapter will be incredible. The best is yet to come.”

And in the comments to Hinchcliffe’s post, Burgess’ partner Brian Austin Green, with whom she is expecting a boy in July, wrote: “I haven’t really spent much time with you but from the short time I’ve had with you it seems really friendly and to be sincere person. Racing was an absolute springboard in life for you. You will venture into amazing things and keep growing. Good luck with everything, my friend. Sharna and I will see you soon.”

In fact, in early 2022, in another series of Instagram Stories, Burgess and Green announced that they had met up with Hinchcliffe and his wife, actress Rebecca Dalton, while they were in Los Angeles. And in 2020, Hinchcliffe posted a sweet tribute to his dance partner on her birthday, writing: “Happy Birthday to the one and only @sharnaburgess! We’ve laughed and had fun since we first met, and while we miss you on your birthday, we hope you have as much fun as the second picture, haha! See you soon!”