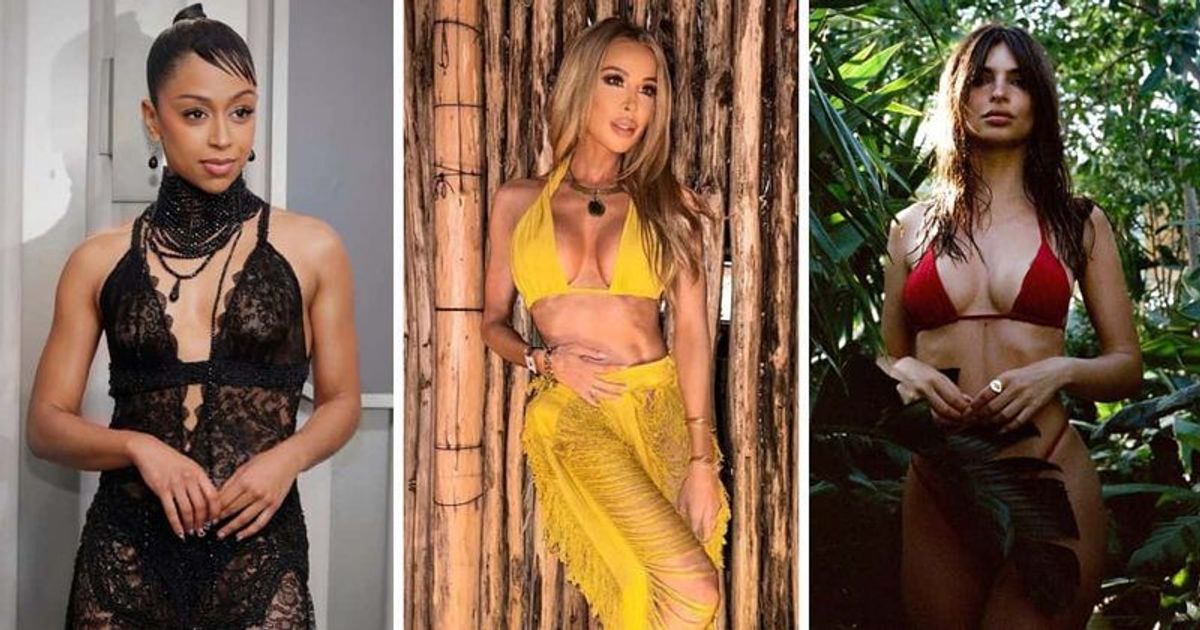 This weekly feature takes you into the glamorous, fast-paced, and sometimes just plain heartbreaking world of celebrity Instagram pages. From the sexiest in the world to the pictures that just blow your mind. We’re looking for them so you don’t have to.

The second week of 2023 saw a slew of events, from Hollywood divas showing their best at the Golden Globes to Lucien Laviscount hitting new heights of fame after appearing in Netflix hit Emily in Paris found fame. And then there was Emily Ratajkowski, who revealed details about her affair with Pete Davidson on The High Low podcast. This week has been packed with the best red carpet looks, gossip and drama! But it also saw celebs fueling our Instagram feeds with their sexy snaps. So, just in case you missed the hot gram tornado, here is a list of the 10 sexiest celebrity Instagram pics you shouldn’t miss.

Supermodel and actress Joan Smalls, 34, shared five stunning snaps of her enjoying a tropical spot. The first picture showed her in a leopard print bikini, floral Hawaiian shirt and green ski goggles. While the next one showed her playfully standing on the front of a Land Rover and posing for the camera. The model, who has been a face of Estee Lauder since 2011, told Vogue in 2015 how she keeps fit. She said: “I train almost every day and I mix it up: I do Thai kickboxing, I have a personal trainer, I train at my gym. I actually like to train. It’s such a stress reliever when you’re just focusing on yourself and not thinking about anything other than the music and your body. I always think it’s strong as a woman to be able to pull your own body weight and defend yourself.”

The ‘Puss in Boots: Last Wish’ star took to social media to let fans get a good look at her attire at the 2023 Golden Globes. She wore a bespoke crystal embroidered Gucci gown paired with Maison Boucheron jewels, a Dionysus clutch and ‘I wish I could tell you I arrived on a plane from Europe, woke up like this and just put on a dress hatched, but in reality it took a beauty army of skilled soldiers to get me together for the #GoldenGlobes red carpet last night! Thank you @gucci, @boucheron and my entire crew!!”

The ‘The Real Housewives of Miami’ actress sure knows how to pump up the hot meter of her feed. The 40-year-old shared a couple of snaps from Tulum, Mexico with the caption, “Spicier than my margarita,” and wore a custom yellow string bikini top and fringed bottoms by Thrifts + Threads. This comes after she told her former husband Lenny Hochstein to stop being “awkward” as they have two children following the divorce drama. The duo split in May 2022, reports Page Six.

Maren Morris showed off all her curves in a zebra print bikini. She also shared a short video of herself in the same outfit with the caption, “A camera self-timer is a useful tool for a**holes.”

She’s been making a style statement since she burst into the limelight in 2012, when she rose to fame after starring in DJ Fresh’s single “Hot Right Now.” And she still doesn’t fail to really heat things up. The 32-year-old singer-songwriter, who wore Giuseppe di Morabito, teased her lead single RO3 and then shared another topless photo to promote her upcoming single You Only Love Me.

Emily Ratajkowski wowed her 29.7million fans in a tiny red bikini as she appeared on the beach at sunset four days ago. She recently opened up about her affair with Pete Davidson on a Jan. 3 episode of her podcast, High Low. She said: “I feel like I’m putting on the worst [men]. Sometimes I’m like ‘[expletive]’ Because I want a confident man. I don’t want an overly confident man who has something to prove and is trying to prove it through me,” Geo TV said.

Kendall, 27, wore a blue and red leopard print bralette paired with high-waisted underwear in the same print in her most recent post. The pictures come after Kendall and her ex Devin Booker’s split was revealed, as reported by People. A source said: “Both are incredibly busy with their careers right now and they’ve decided to make that a priority.”

The 26-year-old media personality looked gorgeous in Morphew Atelier’s vintage-inspired Victorian sheer lace dress with a racy surprise at the back, a black thong. The star, who posted snaps from the 2023 Golden Globes, was spotted donning her dress with collar necklace, drop earrings by Ray Griffiths and diamond ear jackets by Idyl, says Glamour.

There’s no denying he’s really hot. The actor, who made it big with his Netflix series Emily in Paris, was in the news recently when rumors suggested he could be the next James Bond. As quoted by Metro, ex-girlfriend Kerry Katona said: “I saw Lucien as Alfie in Emily in Paris on Netflix – he’s a great actor so it’s no wonder he’s being billed as the next Bond.”

Sharing a slideshow of Instagram snaps, Megan Fox wrote: “Currently looking for a girlfriend. Please submit applications in the DMs.” Many couldn’t stop gushing about the 36-year-old actress, saying, “Sexy as ever.” She also ended her first anniversary with rapper Machine Gun Kelly. To celebrate, her fiancé shared a throwback video to his Instagram Story on Jan. 11 from the day he proposed to her, writing, “A year ago under a banyan tree.” The duo got engaged last year at the Ritz Carlton Dorado Beach Resort in Puerto Rico.