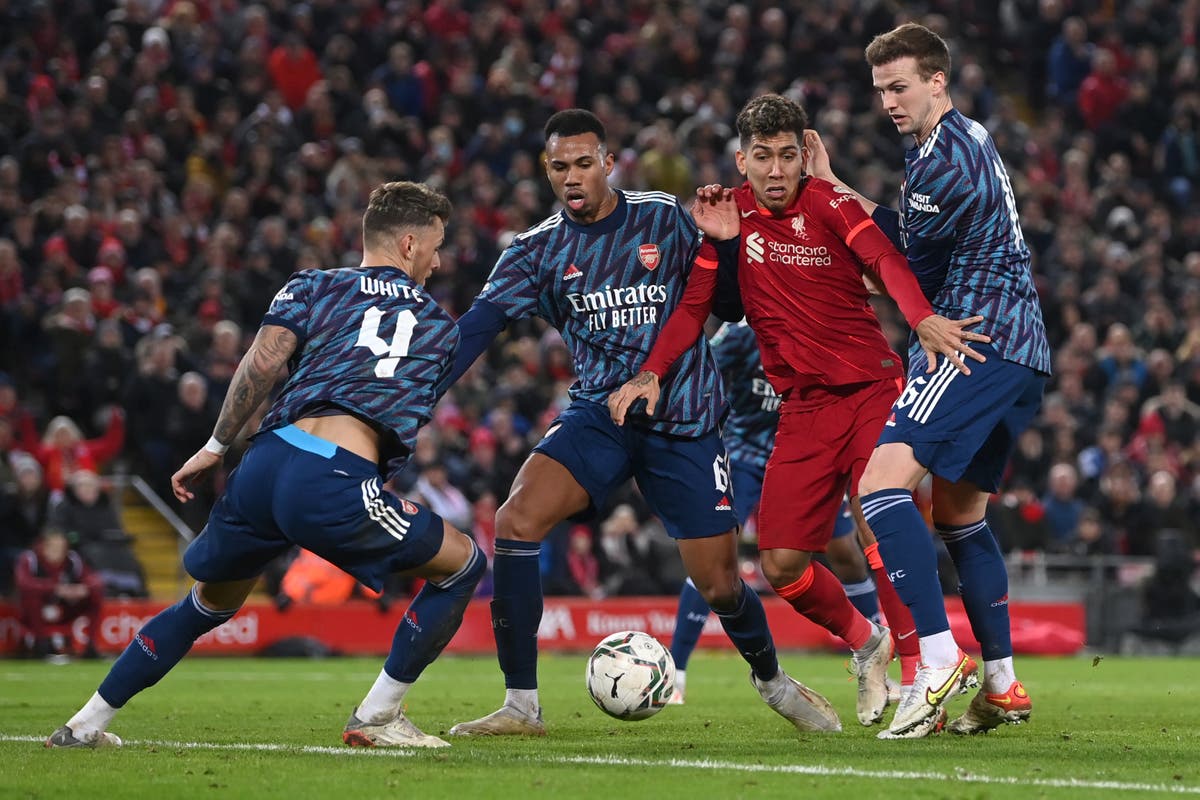 A game marred by false positives, conspiracies to postpone Covid and coverage of an EFL inquiry that would never happen has all the gravy out of the way in the run-up.

Liverpool’s first leg against Arsenal in the Carabao Cup semi-finals, a week after the original date was scuttled by a feared Omicron outbreak at Anfield club, was in bad taste, but for a moment of ‘He did it again!’

There were no goals but the game recorded an early shower. If you were to learn that Arsenal were red carded after 24 minutes and still 0-0 for sheer stupidity combined with dangerous play and denying a scoring opportunity, the overwhelming answer would be: Granit Xhaka again?

Why always him? Because the Swiss international seems determined to do ill-considered things that undo the right ones.

Here Andy Robertson had sent a long pass over the top in search of Diogo Jota. A running back Xhaka stuck out a leg to slice it out, only his foot was planted very high and very heavily in the forward’s chest, bringing him down on the edge of the box.

The 29-year-old protested it was an honest attempt to win the ball, but referee Michael Oliver had choices and a mix of reasons to send him off: to endanger an opponent or to thwart a clear scoring opportunity. Pure, undiluted Xhaka and poor arsenal.

Arteta’s men did well to further restrict Liverpool despite their numerical disadvantage. Perhaps that was due to their experience of usually letting a man down, and they still offered some menace on the counter.

The hosts had started dominantly and made a flood of half-openings. Jordan Henderson fired Aaron Ramsdale’s kick but the keeper slapped the ball away for a corner. Ben White prevented Roberto Firmino by tucking the ball away from his foot and Bukayo Saka blocked a Robertson shot.

Liverpool lived life by the corner flags but didn’t really make it uncomfortable for Arsenal, which was disappointing from a strong XI.

The team sheet thus read was Liverpool’s first domestic cup semi-final in five years; an excellent opportunity to take silver this season as the club lag behind in the league and have no guarantees in Europe.

Yet even after Xhaka’s red, they struggled to conjure up something meritorious. A chip from Takumi Minamino formed to intercept Ramsdale and nestle tight into the far corner, but ended wide.

Arsenal, on the other hand, had a promising period before being sent off. Alisson cleared an inviting Saka ball, Alexandre Lacazette tried unsuccessfully to stun the keeper with an unexpected shot from 35 yards.

By this point, Arteta had already used up one substitution, with Callum Chambers replacing the injured Cedric Soares. Xhaka’s recklessness created another when Eddie Nketiah was sacrificed for Rob Holding to put a back five in play.

The visitors forced the first real save after the break: Kieran Tierney sped down the left flank after a counterattack and supplied Saka in the space between Virgil van Dijk and Robertson. The England international took a touch to gain control of the ball but Alisson darted off his line and slapped the ball away before a shot could get off the ground.

Liverpool had tried to liven up their game with a series of changes, with Curtis Jones, Alex Oxlade-Chamberlain, Joe Gomez and Neco Williams replacing James Milner, Fabinho, Matip and Trent Alexander-Arnold.

Minamino shockingly charged over the line from close range and the home side didn’t even get a shot on target.

There was still no golden margin, no goals and Arteta will be the happier manager going into the second leg given the circumstances.

Saka limped away to spoil his mood, which will also be colored by how exactly one solves the Xhaka puzzle.