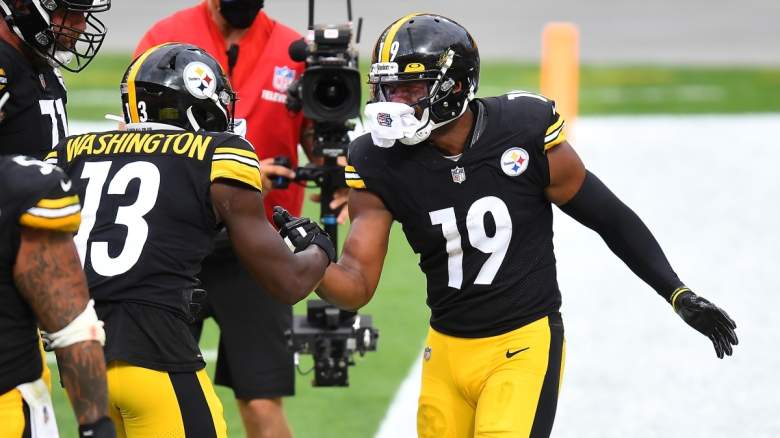 On Jan. 13, the Pittsburgh Steelers saw two former second-round picks return to practice. Notably, starting wide receiver JuJu Smith-Schuster was back on the field for the first time since suffering a shoulder injury in the second quarter of the week five game in Pittsburgh against the Denver Broncos. Several NFL reporters used the word “interesting” to describe this somewhat surprising development. including Ian Rapoport of the NFL Network, who called the news an “interesting twist.” After all, the injury required surgery and was probably the end of the season.

For now, JuJu Smith-Schuster remains on the reserves/injured list and the team has 21 days to add him to the 53-man list. It doesn’t seem likely he could return for Sunday’s wildcard game against the Kansas City Chiefs, but perhaps he could return later in the playoffs provided the Steelers find a way to get past the AFC No. 2.

Mark Kaboly, covering the Steelers for The Athletic, tweeted that Smith-Schuster “could be back for the Super Bowl,” which is undoubtedly a realistic schedule. But maybe Kaboly is also being a bit of a joke, considering the Steelers are a double-digit underdog against the Chiefs and would need to win three away games against higher-seeded teams to make the big game.

But it’s also possible that Smith-Schuster could return sooner. On Dec. 7, 25-year-old wideout Brooke Pryor told ESPN that there was a chance he could return to the AFC championship game or the Super Bowl. “For me, both work,” he says.

“There’s a percentage that I could possibly come back and partake in [the AFC championship],” he added. “That’s where I am right now. I rehab as much as I can every day, just trying to catch up. You just never know.”

Before he was injured, Smith-Schuster had 15 catches for 129 yards and no touchdowns. Primary kick returner Ray-Ray McCloud has filled in Smith-Schuster’s role with increasing success. McCloud finished the regular season with 39 receptions for 277 yards.

Smith-Schuster is expected to become a full free agent after his one-year, $8 million contract expires at the end of this season.

Wide receiver James Washington also returned to practice Thursday after being removed from the reserve/COVID-19 list. Washington was sidelined on January 8 and did not play the Ravens in the regular season finale.

Even with Smith-Schuster out of the lineup as of Oct. 10, Washington hasn’t offered the Steelers the kind of production one would expect from a second-round pick in his fourth year in the league. In 15 regular season games, he caught just 24 passes for 285 yards and two touchdowns. Like Smith-Schuster, he is expected to test free-hand this spring as his rookie contract expires.

Washington was drawn from the state of Oklahoma in 60th place overall in the 2018 NFL Draft. The 25-year-old has 114 career receptions for 1,629 yards and 11 touchdown catches.