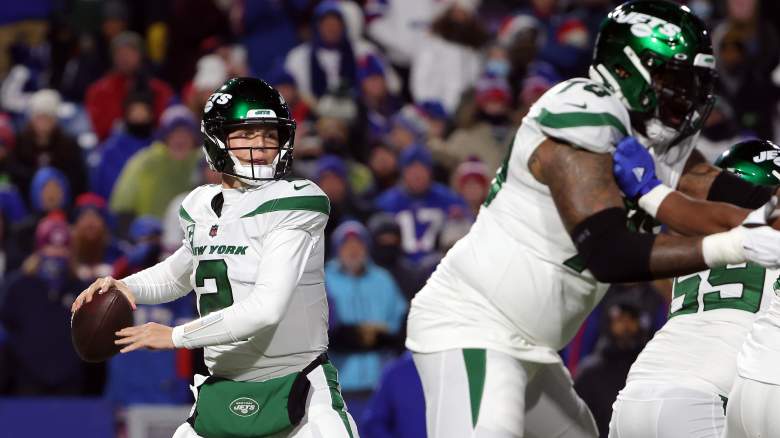 The burning question around Jets Land right now seems to be whether GM Joe Douglas should use those two picks on defense, one on offense, one each, or trade one of the two further back for more choices.

It’s an intriguing subject because the possibilities are endless, and so are WFAN’s Tiki and Tierney discussed how quarterback Zach Wilson could influence the decision during their Jan. 11 show.

ALL the latest Jets news straight to your inbox! Join this Heavy on Jets Newsletter here!

While co-host BrandonTierney stating that he believes the Jets should go one-for-one with the first rounds, former New York Giants great Tiki Barber was clear in his mind – all defense.

Tierney countered that the offense was still incomplete, especially at the tight end, but Barber continued, “I still believe in the defensive side of the ball even though I know it’s an offensive game [now]… but I also know that’s my feeling there [are] specific quarterbacks that you can raise. Zach feels like a guy who can nurture talent, he can highlight talent, and so I’m not worried about getting the next Julio Jones… [or] Justin Jefferson. It would be a luxury… I think the Jets have so much to do on the defensive side of the ball.”

The former running back continued, noting that while he loves Robert Saleh’s defensive philosophy, the franchise needs an influx of talent to pull it all together.

It was a very interesting take from a very knowledgeable football mind. Considering all the Wilson bust talk that Jets fans had to deal with in year one, it’s just music to the ears to hear “Wilson the Elevator” after a solid performance all the way down.

“[His ceiling is] impossible to know,” Barber began, “simply because you don’t know what’s going to be around him. You don’t know what the success of the team will be like. I know what successful quarterbacks have, what they own, and it’s almost this shell of — I won’t tell you what. And I’m not saying he doesn’t care, I’m not saying that, but there’s been a lot of negativity around this team and around their game this year and it’s never affected him … there’s a trust in Zach in the way he’s doing it carries himself, how he prepares, how he wants to be – that gives you confidence, it gives you hope that he’s going to be really, really good.

He concluded, “At the end of the day, you have to be able to execute when it counts.”

Tierney then touted his arm strength – agree BT, he’s got a gun – his guts, football IQ and athleticism. The only area where Barber disagreed with his co-host was arm strength.

Speaking of assessments, Douglas commented on the BYU product’s rookie season during his year-end press conference.

“I’ve seen a lot of growth from Zach this year,” the GM said. “I think it’s difficult being a rookie playing quarterback in this league and I know Coach [Saleh] has been talking about it all season, but I think the progress you’ve seen Zach make after coming back from injury — and on top of that, not always in the position to be with his starters at all skill spots to play, at wide receiver, tight end, running back – but improving, keeping the team a little short-handed late in those games in the competition and taking care of the football on top of that, I think that was everything in the second half of the season very impressive things.”

In the end, Douglas noted that the Jets are “feeling very confident [Wilson’s] development is progressing.”

How do you feel about Wilson’s rookie campaign? And do you think the Jets should continue to prioritize building around the QB, or shift that urgency to the defensive side in 2022?

Follow @ Obermüller_nyj and @ BoyGreen25 on Twitter for all the news New York Jets Breaking news, rumours, fresh takes and more!

Speaking of assessments, Douglas commented on the BYU product’s rookie season during his year-end press conference.