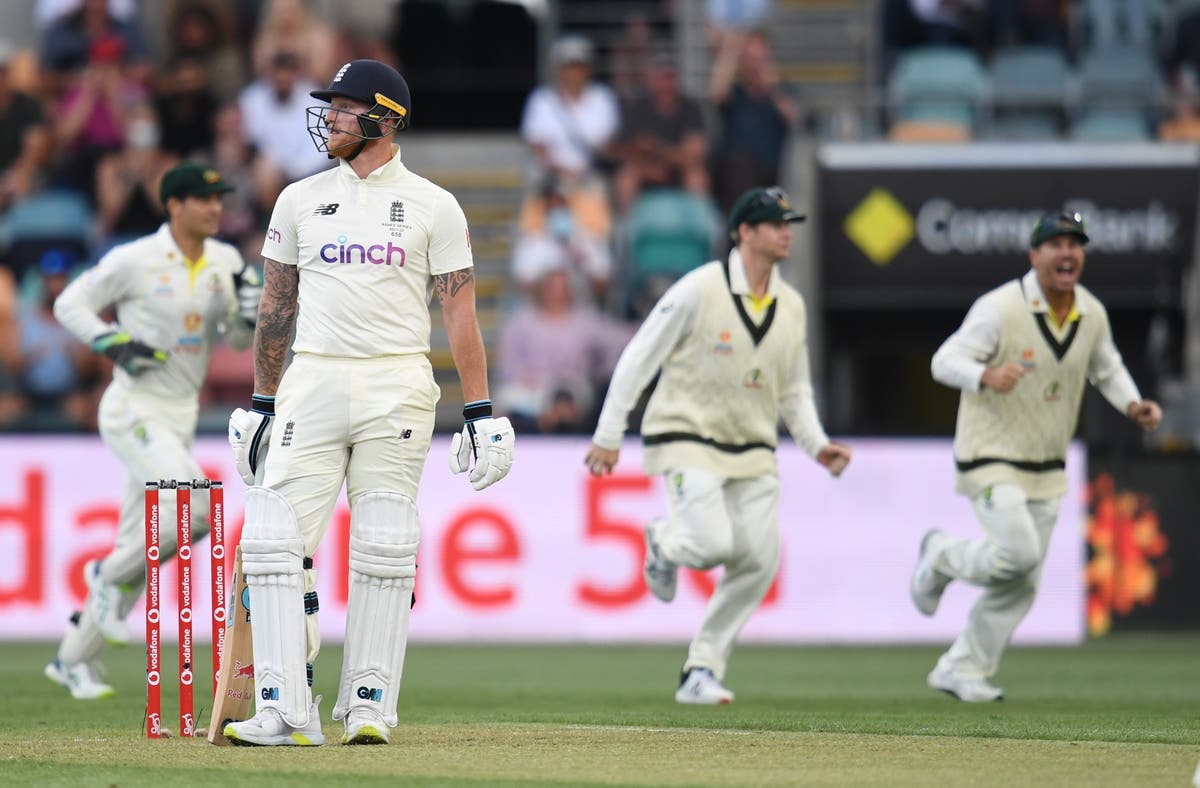 England’s top flight aflame again as they limped to 124 for six in the final Ashes Test in Hobart.

After knocking out the hosts for 303, the tourists started their innings in some of the best batting conditions in the series but couldn’t shake their bad habits that have dogged them throughout the tour.

Things started with a wicket present for the Australians when Rory Burns unnecessarily ran for a duck on his return to the side and things improved only marginally from there.

Zak Crawley, whose bad reputation got his opening partner in trouble, couldn’t make amends as he became the first of three casualties for home skipper Pat Cummins and buckled his mid-order spine in the evening session.

After a hard-fought 49-run streak, Dawid Malan and captain Joe Root fell in close succession before Ben Stokes was superbly caught to make it three wickets with 21 balls. Only seven runs were added to the total during that period, leaving England 85 for five.

Ollie Pope, who received an unexpected lifeline in fifth due to Jonny Bairstow’s thumb injury, failed to learn his lesson with a tame edge outside the stump, leaving a debutant in charge of the firefighting mission.

Wicketkeeper Sam Billings has spent the last few weeks playing Twenty20 cricket with Big Bash franchise Sydney Thunder and only a few days ago joined the camp. He was undefeated at the tea break on the 19th and tasked with managing the twilight period under lights.

Australia had resumed in the 241st for six after successfully weathering their own struggles on day one as they went from 12 to three. They added a further 62 runs for their final four wickets, with the stern hitting late enough to easily squeeze past England’s best result of the series (297 in Brisbane).

After Ollie Robinson was again unable to bowl due to a back spasm – and his ears were ringing with a warning about his general fitness – England turned to Mark Wood to lead his charge.

His chosen method was a barrage of 90mph high bouncers, but his initial success – Mitchell Starc and Cummins both succumbing to the top edges of short balls – came to a surprise halt when number 10-no10 Nathan Lyon took him in quick succession for three Sixes started.

Stuart Broad ended his fun for 31, but by then Australia had regained a position of strength.

Burns was taken out of the firing line after two hot Tests but was back on the save due to Haseeb Hameed’s poor form. He won’t look back fondly on his comeback innings, as he endured three awkward moments in Starc’s first over – including a suspected edge that went undetected – before being eliminated after Crawley’s dodgy call.

Both men stuttered as the risk became apparent, but it was Burns who paid the price as Marnus Labuschagne threw the stumps out of cover and refused to jump for the line.

Crawley had some catching up to do and helped himself at three borders in a typically assertive start. But it was a cameo that left his side in need of a clinic. Cummins set the trap and jumped it as an inside edge cannoned into the thigh pad and was yanked up by Travis Head’s short leg.

Malan and Root, who shared a booth on the series two centuries ago, came through shaky starts to raise hopes of another decent booth, but it wasn’t to be.

There was a sense of fatalism in Malan’s Five Boundaries, and not for the first time Cummins had him flicked off his pads. That brought together Root and Stokes, two players with the quality to compete.

But both fell short of their own high standards. Root hit a 34 before Cummins defeated him, hitting one from the court and winning a narrow lbw call. Stokes, meanwhile, scored his only four runs with a shot dangerously close to a leg slip that was well intercepted by Lyon as he tried to force Starc through the point.

Pope’s last insignificant stay ended on the 14th when he nabbed Scott Boland, who was vaguely hustling on one he may have left, leaving Billings to shoulder the burden. He settled down with two nice drives down the middle and looked safe around his area, while all-rounder Chris Woakes was dropped twice when he slid off the unfortunate Boland.