Eagles as the #1 landing spot for Calvin Ridley 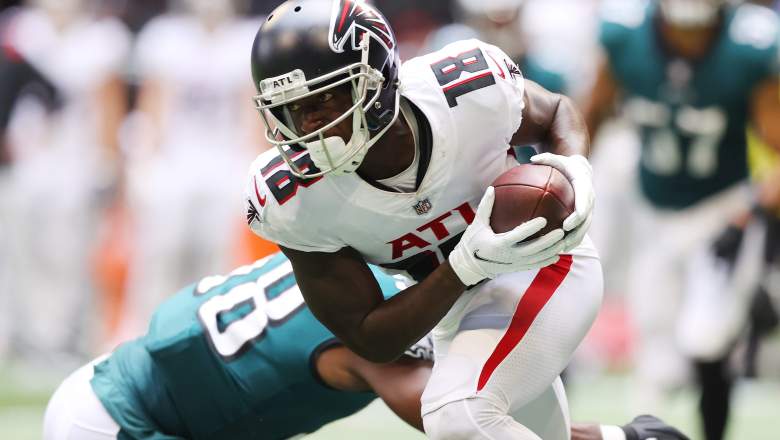 In Week 8 of the 2021 season, Atlanta Falcons star wide receiver Calvin Ridley decided to retire from football – citing mental health as a reason.

After Ridley failed to receive an update after the season concluded, it was predicted that the Falcons will attempt to trade the All-Pro wideout.

And CBS Sports’ Cody Benjamin listed the Philadelphia Eagles as the #1 landing spot for Ridley.

NFL Networks Steve Wyche joined that Dukes & Bells Podcast where he offered his educated guess as to the possible fate of the Falcons’ top wide receiver.

Asked if Ridley’s future with the team was in jeopardy, Wyche had no hesitation:

“Yes, I would think so,” he said. “I don’t know everything that’s going on here, but the fact that he’s not serving and the team hasn’t said anything about him all season … makes me think that at some point his team is like he’s going to need a fresh start,” or the Falcons could say, “Hey, we need a fresh start.” It would be hard to imagine with everything this team is trying to do… with new leadership and all…

Maybe if it was a Pittsburgh situation and Arthur Smith had been the coach here for 7 or 8 years, maybe they would say, ‘Okay, we can bring him back.’ But I think because they’re trying to start over and get things going, there will be some sort of goodbye at some point – that’s my best guess.

I don’t know if that’s going to happen, but yeah, that’s the kind of scenario where I think it’s going to be a fresh start somewhere else for him.

After the Week 8 loss to the Carolina Panthers, the Falcons placed him on the non-football injury list, which put him out for at least three weeks. But he never returned and finished the 2021 season with 31 catches for 281 yards and two touchdowns.

The Falcons’ Offense clear struggled with the lack of reliable receivers for Matt Ryan after they missed the postseason for the fifth straight year. They need to address the issue with or without Ridley returning.

However, the WR position is not the only position the Falcons need to address, in fact their list of needs is long. Selling Ridley in exchange for Draft Capital could be the best bet to put her team back on track as a playoff contender.

So if the Eagles are poised for a blockbuster trade with lots of picks to throw Atlanta the way, the Falcons should move away from Ridley.