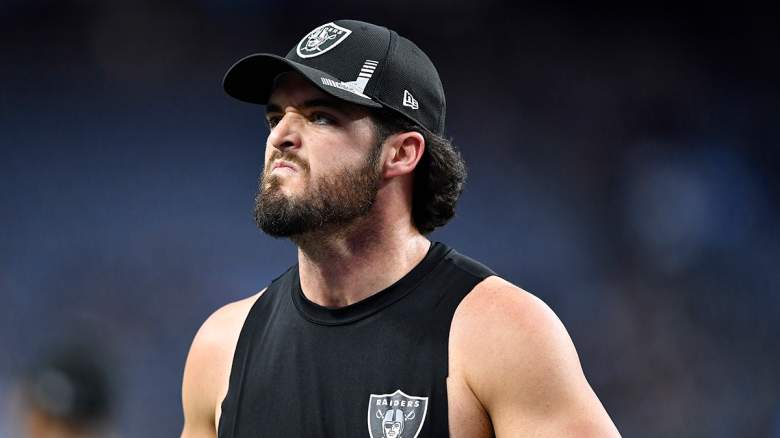 After years of disappointment, Derek Carr makes his playoff debut with the Las Vegas Raiders. He led the team to a wildcard spot in 2016, but an injury kept him out of the playoffs. With the team’s win over the Los Angeles Chargers on Sunday, Carr set himself up for his first playoff game against the Cincinnati Bengals.

To say the quarterback is hyped would be an understatement. When the Chargers game was over Carr was fired up like he always was. But the work is far from over. It’s great to get to the playoffs, but the Raiders are about Super Bowls. In the 1980 season, the Raiders became the first wild card team to win the Super Bowl. They were in a similar position now and while a Super Bowl may seem far-fetched, Carr clearly has his eye on the prize.

Ahead of the matchup against the Bengals, the Raiders quarterback released an epic hype video.

It’s been a long road for Carr to get to this moment. The Raiders haven’t exactly been the most cohesive organization in the NFL. Many other quarterbacks would have already given up the team. Carr has remained committed and he’s just grateful to finally get over the hump, but he’s not satisfied yet.

“Obviously I’ve dreamed of this since I got drafted,” Carr said Tuesday. “I just want to make the playoffs and try to win a championship. And the fact that we’re in the tournament is really cool.

“Like I said, I’m super grateful. I’ve worked my tail off. I’ve prayed that one day I could experience this and I will. It’s cool. But at the same time, my goal wasn’t just to make the playoffs… you always have bigger goals and bigger dreams and you’re always trying to achieve more.”

There is perhaps no player in the NFL who needed a playoff appearance more than Carr. After the disappointment of 2016 he now gets the chance to show what he can do.

There was a point just a month ago where the Raiders were 6-7 and lost five out of six games. It looked like the season was pretty much over. Instead, by the end of the year, the team had four straight wins and secured a place in the playoffs. Carr admitted it wasn’t easy but praised his team for never giving up on the season.

“We didn’t stop,” Carr said. “God knows I’ve gone home many times after talking to all of you and your human feelings were just like, ‘Why am I even doing this?’ And you immediately remember the reasons why you do it.

“So to accomplish something no one thought of – if you said you thought we were going to do that, I’m going to kick you. … Nobody thought that, but the people in the building did and we acted that way.”

MOTOR ON What Car?’s 2022 Car of the Year revealed – here’s the full list of the top engines

MOTOR ON What Car?’s 2022 Car of the Year revealed – here’s the full list of the top engines