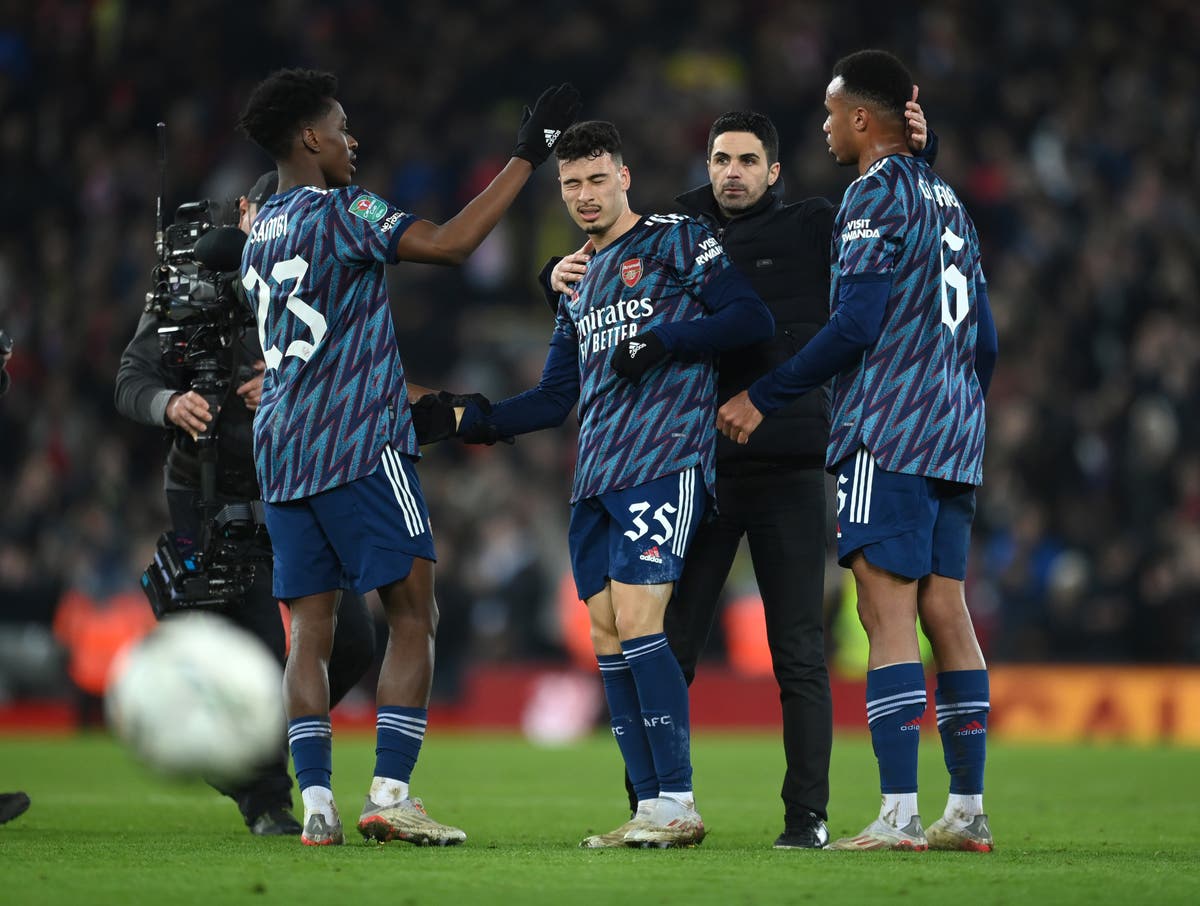 Arsenal manager Mikel Arteta praised the defensive performance that earned his side a goalless draw against Liverpool in the first leg of the Carabao Cup semi-final – but fears it may have called into question Sunday’s north London derby.

After Granit Xhaka’s second red card in just 13 games of the season, the Gunners had to play 10 men for 71 minutes at Anfield, but their organized 5-3-1 formation was enough to keep their opponents comfortably at bay.

But with Xhaka now suspended, Cedric Soares and Bukayo Saka both injured after limping, four other players injured or out with Covid and four at the African Nations Cup, Arteta could be without 11 players for the trip to Tottenham.

“I’m really proud of what the lads did today in a difficult stadium against a great opponent and played 70 minutes with 10 men,” he said. “It was about the fight, the spirit and the commitment and the quality to play the game.

“When you come to a stadium like this you have to choose players who like to go to war because you have to fight, you will have difficult moments where you have to suffer.

“You are willing to accept that you will not play the game you want.

“When you play with that spirit and fight as a team and be brotherly, you get rewarded and I think that’s what happened.”

But how the knock-on effects could play out in this weekend’s Premier League game, the Spaniard added: “I don’t know.

“It’s an opportunity in every game, from our side, from the opposing side, because of the amount of problems everyone has and because it happens every week.

“We try to prepare games that we think we will play. If something happens along the way, it is what it is.”

Liverpool’s problem is finding a way to replace the goals usually scored by Mohamed Salah and Sadio Mane, both in the Africa Cup of Nations.

Jürgen Klopp’s side were limited to just one shot on goal – in stoppage time – from 17 attempts.

In 263 minutes of six games this season, Liverpool have played against 10 men who have netted them just three times, two of which were penalties.

“It looked like we were under pressure. That doesn’t make sense, but that’s human,” said Klopp.

“You go out to win. It’s difficult against a well-drilled formation. We didn’t create enough, we didn’t do many things well enough.

“Then it was a red card and it’s difficult to play against the low block. We also made a few wrong decisions.

“We’ve known for years that it can happen. Could we prepare better for this? I do not think so.