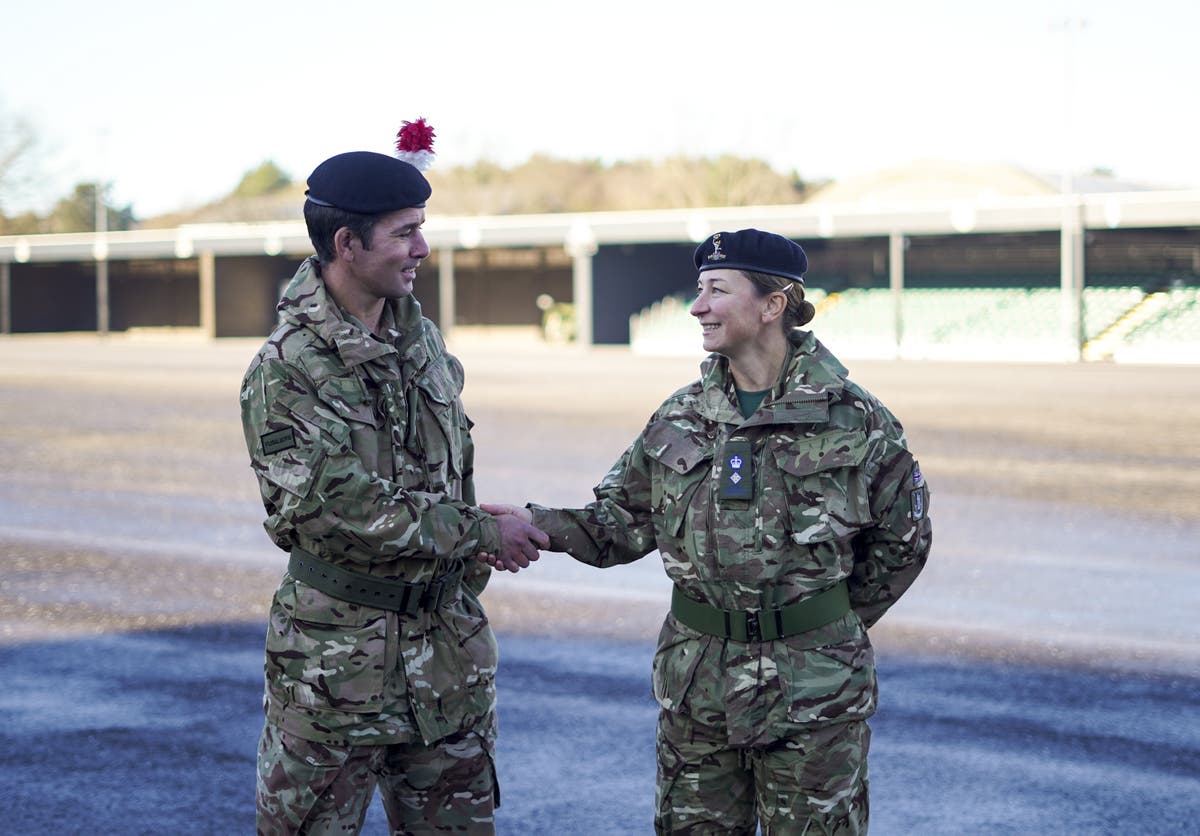 The first female officer to command Army Training Regiment No. 1 took over the role – from her husband.

Lieutenant Colonel Lyndsey Kelly has accepted the appointment to the Army Training Center at Pirbright, Surrey, taking over from her husband, Lt. Col. Shamus Kelly, in command of the 165-strong staff.

And while she takes up her new position, Shamus will continue to work at the regiment’s headquarters, also in Pirbright.

The couple, who have two children, Alex, seven, and William, four, both joined the Army in 2001 before meeting nine years later during a training course and marrying in 2013.

An Army spokesman said: “When Lt. Col. Lyndsey Kelly becomes commander of the No. 1 Army Training Regiment (ATR) at the Army Training Center in Pirbright, not only will she become the first female officer to do so, she will be unique in being in command of her husband, Lieutenant Colonel Shamus Kelly OBE, take over.”

Lyndsey, 42, said: “I’ve been to the training environment before and enjoyed it so much which is why I chose to come back here.

“I love shaping and influencing the recruits, our next generation of our army, but I also love working with such motivated people.”

Shamus, 44, said: “The advice I would give Lyndsey is the advice everyone gave me before I took charge. You have two and a half years to invest in our people, it means taking care of our people and enjoying the moment very much.

“When you have recruits, they are vulnerable adults, they are very suggestible, so making sure you protect them and look after them is a huge responsibility.”

Lyndsey said it’s too early to say what changes she would make to the organization, but said integration is a priority for her.

She said: “It’s a really well oiled machine from my perspective and I think the integration is working really well and something I’ll be keeping a close eye on.

“I’m particularly proud to be at this appointment, I’d like to think if a male or female recruit sees on day one that there are no differences between men and women, that’s perfectly normal and that’s what they expect should her career.

“I am particularly interested in ensuring that this environment is healthy and reflective of the Army and society at large.”

“We really need to have confidence that our people are always trying to do the right thing at the right time, no matter what the pressure they’re under, and the only way to ensure that confidence is by walking them through basic training if you see any issues , where the behavior is unacceptable, you have the option to change or weed out that behavior.

“This is a really important filtering process to ensure the next generation of soldiers live, breathe and work according to our standards.”

Speaking of the close working relationship, Lyndsey said: “I think we are both confident that there would be no friction, but we would be equally foolish to think that there will never be any issues on which we do not have differences of opinion.

“On the big stuff, our values ​​and standards are totally aligned so I think we’re going to get by just fine, but for a place like Pirbright, which has such an incredible pace, and Covid, to make it even more complex, there’s there undoubtedly something to do at times when there are some tough decisions to make.

The Army spokesman added: “When Lyndsey assumes command of 1ATR, she will be given the responsibility of converting civilians into soldiers with basic training, with up to 500+ recruits undergoing training at a time.

“These are young men and women, some of whom have just come straight from school and all have little or no experience in the world of work.

“The 14 week basic training program teaches recruits the structure of the British Army, how to live and operate as a soldier in the field. It builds their physical and mental resilience through a progressive and challenging development program.

“But above all it focuses on developing their character and immersing them in the values ​​and standards of the British Army – crucial to ensuring our people always do the right thing, even in the most difficult of circumstances.”