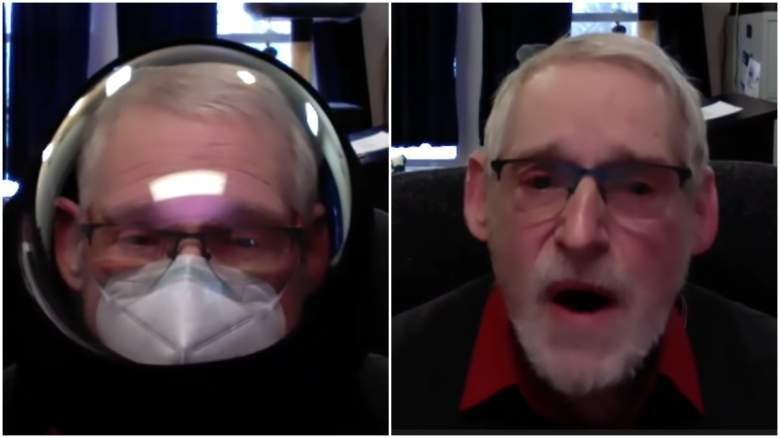 Barry Mehler is a Ferris State University professor who was suspended after posting a profanity-filled video for his class, telling students they were “disease carriers” who are “staying the fuck away from me” due to COVID should”. 19

Mehler’s epic introductory class video, which he posted to his YouTube page, begins with him wearing what appears to be a space or motorcycle helmet. The video has more than 200,000 views.

In the video, he repeatedly uses the “F” word and refers to students and administrators as “c***********”. He told students they would win nothing if they came to class, said he randomized their grades before classes started, and advised them not to get caught plagiarizing.

Mehler’s faculty page is scrubbed. However, the snippet for it reads: “I am a historian of science and the director of two institutes here in Ferris, the ISAR (Institute for the Study of Academic Racism) and the Shoah Institute.” He is listed as Barry Mehler, PhD.

Ferris State is a public university in Big Rapids, Michigan.

In particular, Mehler has focused his research on eugenics. The Institute for the Study of Academic Racism says: “Dr. Barry Mehler speaks of the parallels he’s seen between the far-right network of intellectuals and the rapid, devastating manner in which eugenics research was deployed in Nazi Germany, scaring him about the possibility that the brutal Atrocities of the past could happen again.” Some of his archived writings can be found here.

Mehler’s class YouTube video begins with Mehler wearing both a mask and what appears to be a space or motorcycle helmet.

“Let me take that off,” he says, taking off his helmet and mask. “Shit,” he says.

“…The intergalactic internet revolves around this planet. I don’t know if you people have noticed, but it’s dangerous to breathe the air. Many of your experts advise wearing masks because of a deadly virus spreading across the planet. Your civilization is collapsing and life on your planet is dying out. Maybe you just haven’t noticed, but the level of suffering on this planet is skyrocketing.”

Then he said, “Anyway, welcome to the new season of my show, more bad news brought you camel cigarettes.” He said when he was a college student, doctors smoked camel cigarettes. Then he played an old TV commercial about doctors who prefer to smoke Camel cigarettes.

“There you go. So don’t believe all the hype you hear about smoking being bad for you. Native Americans have been smoking the sacred leaves for thousands of years…after we arrived they introduced it to us and we reversed and marketed it around the world…. People around the world smoke cigarettes and we did. It was one of the greatest achievements of American capitalism. Native Americans always thought it was sacred, holy, meant to be shared on special occasions. We saw it as a marketing venture, an opportunity, a way to make huge profits on an addictive product that will eventually kill you.”

It was said to be “pure capitalism turning death into profit”.

Mehler then said the video was intended to introduce students to themselves before “we meet F2F,” meaning face-to-face.

“If you see me next week, I’ll be wearing this helmet,” he said, adding that the helmet cost him $300 and has filters in it, so “it protects me and you from this deadly virus that’s going around… Well, uh, I may have messed up my life…but I stand before you today owed no human condemnation and work a paying damn union job.”

He then said that “because I’m an obsessed professor, no flexible, damn administrator is going to tell me how to teach my classes. So if you want to complain to your dean, damn it, I’m retiring at the end of this year and I don’t give a shit anymore. You guys are just carriers of disease to me and I don’t want to be anywhere near you so keep the damn distance; If you want to talk to me, come to my zoom.”

Mehler then went into a lengthy debate over whether his introduction constituted plagiarism, revealing that it was modeled after an episode of “Deadwood.” He played video from that part of the episode where a character uses similar language.

He warned students that they could be expelled from Ferris if they plagiarized things, but he added, “I always encourage my students not to get caught.”

He said if he was exposed “for the fraud that I am,” nothing would happen, then explained that students must use proper attribution and citations in their assignments.

He said students are probably wondering, ‘How the hell am I supposed to get out of this class alive and with an A? What is it like being a professor?”

The professor explained, “There is absolutely nothing you can do. You have no control over your grade. It doesn’t matter how damn hard you work or how good your grades are. My grading system is based on the Calvinistic theory of predestination. I think if it was good enough for America, it was good enough for me. The Indians didn’t lose because they failed. They’ve tried everything and nothing has worked because the universe doesn’t give a damn about justice. It is destiny and you are all destined to lose like the Indians do.”

Mehler told students that “the American colonies, particularly in the North, were founded by Christians who were essentially Calvinists of one sort or another, and that Calvinist doctrine is interwoven with American ideas of justice.”

He said that Calvin believed that a person was predestined for either salvation or damnation, and most people were chosen for damnation.

He then returned to his evaluation policy, saying, “It doesn’t matter whether you go to church or give alms, your actions don’t count. That’s how it is in my class. None of you C********** are good enough to get an A in my class. So I randomly assign grades before the first day of class. I don’t want to know about you I don’t even want to know your name. I just look at the number and assign the grade.”

He said, “Bring your grievances to God.”

FMehler then read a letter to The New York Times in response to an op-ed piece entitled “Republicans Cry Freedom While People Are Dying.” The letter was written by a professor at another university who tested positive for COVID. The letter blamed Republicans and the university administration.

“Our situation here at Ferris is roughly the same as that described in this letter,” said Mehler. “The only difference is I will be 75 in March and Covid has already killed 1 in 100 Americans over 60. In other words, whatever you think about the risk of Covid, I live in a very different world. My risk is much greater than yours.”

He said the students’ first task is to describe how the last two years have been for them. He said in the past, students have said they missed their grandparents at Christmas because they “didn’t want to expose Grandma and Grandpa to a disease that could kill them.”

He continued, “Listen guys, I’m old enough to be your grandpa and you’re carriers of disease to me. So when I look into a classroom of 50 students, I see 50 selfish…kids who don’t give a fuck if grandpa lives or dies, and if you weren’t exposing your grandpa to possible infection with Covid, then shut the fuck up away from me. If you don’t give a damn if grandpa lives or dies, by all means come to class.”